As soon as she started talking, tears came to her eyes. If it is too painful, if it brings bad memories to you, you do not have to talk. When I told her these words, she said she wanted to talk, she wanted to bear witness. She works as a TBA (Traditional Birth Attendant) for an INGO. As a Rohingya woman she has less opportunities to go outside than men, but she has a strong will.

In her own words she explained what the Rohingya Identity is.

Everyone got scattered on that day. I do not know where my family is. I ran away with my neighbours to Bangladesh. And, Ah, my son and father-in-law were killed by the army and the Buddhist people form Rakhine. Now I live here, with the remaining 6 members of my family. 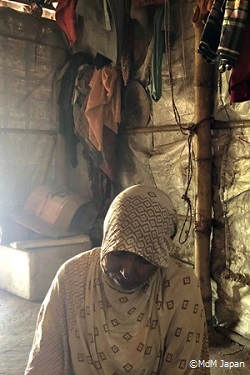 I am a TBA. When I was in Myanmar I was working at Malteser (German NGO). In addition to my role as a TBA, I was in charge of vaccination, polio treatment, and the like. Malteser’s clinic was the only free clinic we had. Other hospitals would only take patients who could pay an extra treatment fee. Poor people with severe illnesses and no money could only wait for death, without any medical treatment.

Now I am worried that the shelter we live in won’t last long and will collapse. I made it with my own hands. Only bamboo was provided, I bought all the other materials myself. Illness can make us succumb, I have pain all over my body. Neither my husband nor I have any income, we cannot eat anything. Without money we cannot buy nutritious products like meat or fish. The only food we get through distribution is rice, oil and beans. I would like to have gas for cooking.
I wouldn’t say that the Bangladesh government is doing bad job on the contrary I think Bangladesh is doing a lot of efforts.

It took seven days to come here. I lost everything. Only the people who have experienced our suffering and difficulties can understand that I came crawling but I arrived. I want to tell our plight to the international community and ask for justice. If there is justice, we will return to Myanmar. To that end, civil rights and human rights must be guaranteed. I would like the international community to work diligently to ensure that human natural rights can be secured for us when we return. I would like to return to Myanmar.

Myanmar government does not recognise Rohingya as an ethic group. We have been a Rohingya for a long time, through many generations. When Japan and the UK fought in Myanmar, Rohingya were involved. There should be evidence to show that Rohingya existed. Yet, I do not know why the Burmese government suddenly came to call us as Bengali. We are Rohingya, that’s it.

With your support, Doctors of the World will make sure nobody suffers or dies due to lack of access to healthcare.

Please Donate
We use cookies to ensure that we give you the best experience on our website. If you continue to use this site we will assume that you are happy with it.Ok